A downloadable game for Windows

Also on Steam! Wishlist above^^

Wishlists help us out with the Steam algorithms, and move us higher up in their suggestions! Every one counts!

Humans are near extinct. Only a few remain, living in isolation. Those that are found are used for slave labor, pleasure, or worse. Orcs, Lycans, Drakes, and other various creatures would love to get their hands on one. Luccia will find out what happened, stop the extinction, and repopulate the human race (some mixing may occur!)

Breaking away from the overcrowded Adult Visual Novel style game, Heavy Hearts is an action game with lewd content.

- Exploration, looting, and trading: Scavenge various materials across the land and craft/trade for other survival / lewd items

- Sneak around, avoiding detection from sentient races looking to cash in on rare breeds of humans. The worst thing that can happen is they turn you in... right?

- ATB Fights! Normal attacks build the ATB gauge (called NRG). Each filled gauge adds a Combat Orb to your Hud, which can be used for abilities. With each orb, you can charge Magic a level, and blast enemies away.

-STAGGER! Run out of HP and you die, but run out of Poise and you will be put into a staggered, vulnerable state.

Time your blocks correctly and you can counterattack!

Mouse and Controller support is coming.

I can't do this without you!

Support the game on Patreon for access to the latest game builds earlier than Itch.io, along with other perks.

Subscribing via Patreon is the #1 way to support HH's development

Also, purchasing the spicy version of Heavy Hearts helps too!

Additionally, if you do not agree with Patreon's policies & censorship of adult content, you may also subscribe via Subscribestar

Join our community on Discord for the quickest access to any new news regarding our projects. Talk to the developers and others who also are a part of our community. Leave bugs reports, feedback, and reviews.  And just hang out!

Heavy Hearts is an ATB/Turn Based Battler featuring art from PixelTheWise & N1 Studios, Cheka, among other artists featured on Itch.

I can't run the game any time I install it I end up with a folder labeled MSVCR error- Common missing dlls containing: msvcp120.dll

how do I fix this problem?

those files are there in case you don't have them. Try moving them into the games root folder.

If I get the hot and spicy version, will that carry over to steam?

Each copy is on an independent platform.

Alright, thanks for clarifying that.

I ran into a bug in level 7. I know full well that this a demo and stops after flying to the doggo wolves and that anything past that point is "well what do you expect" but this is a really bad bug and I accidentally saved just before it jumping over the pits and now I can't jump, pause, or do much of anything except admire the scenery from the bottom of the screen and move back and forth. What I like to know is that when you eventually patch the game to have more content, fix bugs and all that fun stuff, will my problem be fixed or do I have to start over for the 3rd time cause of locking myself previously in an unwinnable situation again. I really don't want to do all that again unless it's a problem with saves and updates! Also... while I am typing here, about how much of the gallery is available in Spicy mode and did I unlock everything I could... even if that is hardly a question you can tell me!... I think

I'm having a problem where when i try to run the game, it just fails. Nothing .dll related or anything. It just says it failed. Is there a reason for that?

so, no error or black / blue screen or anything?

What version of windows are you on? Have you run windows update?

Just a small white window saying it just failed. Yes I did update windows, and everything else u said for the runtime thing. The error had a lot of zeros btw, so if that means smthn then u can maybe help.

So.. I fixed it just by dumping all the provided DLL files. Thats probably not the best solution, but it worked for me. Thanks for helping and responding so quickly!

hi, just wanted to let you know about a small bug. if you run, but continue to hold shift when you stop running, the running animation doesnt stop. thanks, looking forward to seeing where this game goes :D

so...its still giving me the error message mscvr120.dll. I downloaded the c++ software mentioned in the file folder about this issue, and still nothing. any help?

well, mscvr stands for Microsoft visual c runtime. I suggest running Windows Update, or download V C Runtike from Microsoft itself. It is a software dependency required to run the game

When I start the game my screen goes black with nothing showing up.

There will be. Please remember the game is only version 0.3.5

Load the game cause the game to crash

how to get past level 7?

Saving and clicking "continue" causes a crash.
>Somehow fixed itself, but until much later.

When I try to start it, it just says "The code execution cannot proceed because MSVCR100.dll was not found. Reinstalling the program may fix this problem."

There should be a folder called "Common Missing DLL". Start there and see if adding those files helps.

If not, I recommend you run windows update, and also install microsoft visual C runtime

Disguise is too rare a fetish.

Go back to luccias house after completing the orc villa

Why does my game seem slow compared to others'?

I have the same problem, the game run way slower than in the trailers

where is the key to save the half orc? I cant find it.

inside one of the tiny houses. Closest to where you enter

When you continue the game, on start up, it crashes and the same happens when you try to load a save.

I am aware of that issue. It only happens in the earlier levels. I am working on a solution

can this game be purchased on itch when it is completed?

yes. As a matter of fact, when if you purchase now, you will own it no matter what

I don't know why but I am having troubles with the save and load system, i can save but when i load the game crashes.

that's Book of Lust, no?

Yo, just wanted to say that you fellas made an amazing game and I think you are on the right path to completing an NSFW game that doesn't need the lewd scenes to be recognized. I don't see many comments saying this, but I'm positive plenty of people are thinking it so I just wanted to type it out for yall.

Have a great day

Thank you! This absolutely made my day

In the gallery there is only 6 scenes for now right? I'm not missing any?

Depends on what version of game you have

So, there might bw a problem in the public version. Whenever I attack using the z button, a black bar that covers half the screen appears. Is this normal?

Not normal. May be an issue with your display drivers or Direct X version.

So...is there ANY spicy/lewd content in the base game? There is the scene in the lake that doesn't show anything and after two missions no lewd content at all. I thought it said that if you lose poise you might get "attacked", but when I let that happen I just go prone and then get killed. No spicy content at all, or is it all just later?

It is still in early stages, and I can only make lewd stuff so fast. All or the lewd content is either part of the story, or in the gallery that gets unlocked during progress.

Just downloaded the game and currently having save/load issues, i see other people have the same problem and that the solution would be to use the latest version, but that is what i'm currently using

Sadly, the game is still unplayable.
This time, it crashed after trying to manually save. Save lost.

Can you give more information, such as where you where when you tried to save? And what error it gave?

Rhed freezes midflight in the mountains every time after talking to the yellow-eyed wolf, once he says he can't fly.

Please tell me the save/load bug was targeted with this hotfix! I've wanted to actually delve into this game, but restarting every loss was so painful haha

EDIT: Sadly, still no savefile fix. Oh well, I am loving what I've played. I can't wait to see more. Stuck in Orc Village stealth section (after rain) due to save bug now.

What version are you playing? There is currently a workaround that prevents the save-load crash.

Hey, I bought this game at version 0.3.3 and with the recent update to 0.3.5, I cant download this version without paying for it. I'm probably missing something but i just wanted to see if there was a issue.

you should have access to the build if you paid for the previous version. Once you buy it here, it's yours.

Worst case, DM me on discord and I'll help you out.

I found it, thanks.

Check the top of the page for a grey bar saying you own the game.

The public version crashes in the tutorial, and if you skip to the grove you can't walk around in the first section.

at what part does it crash in the tutorial?

Are you accessing the menu at any point? 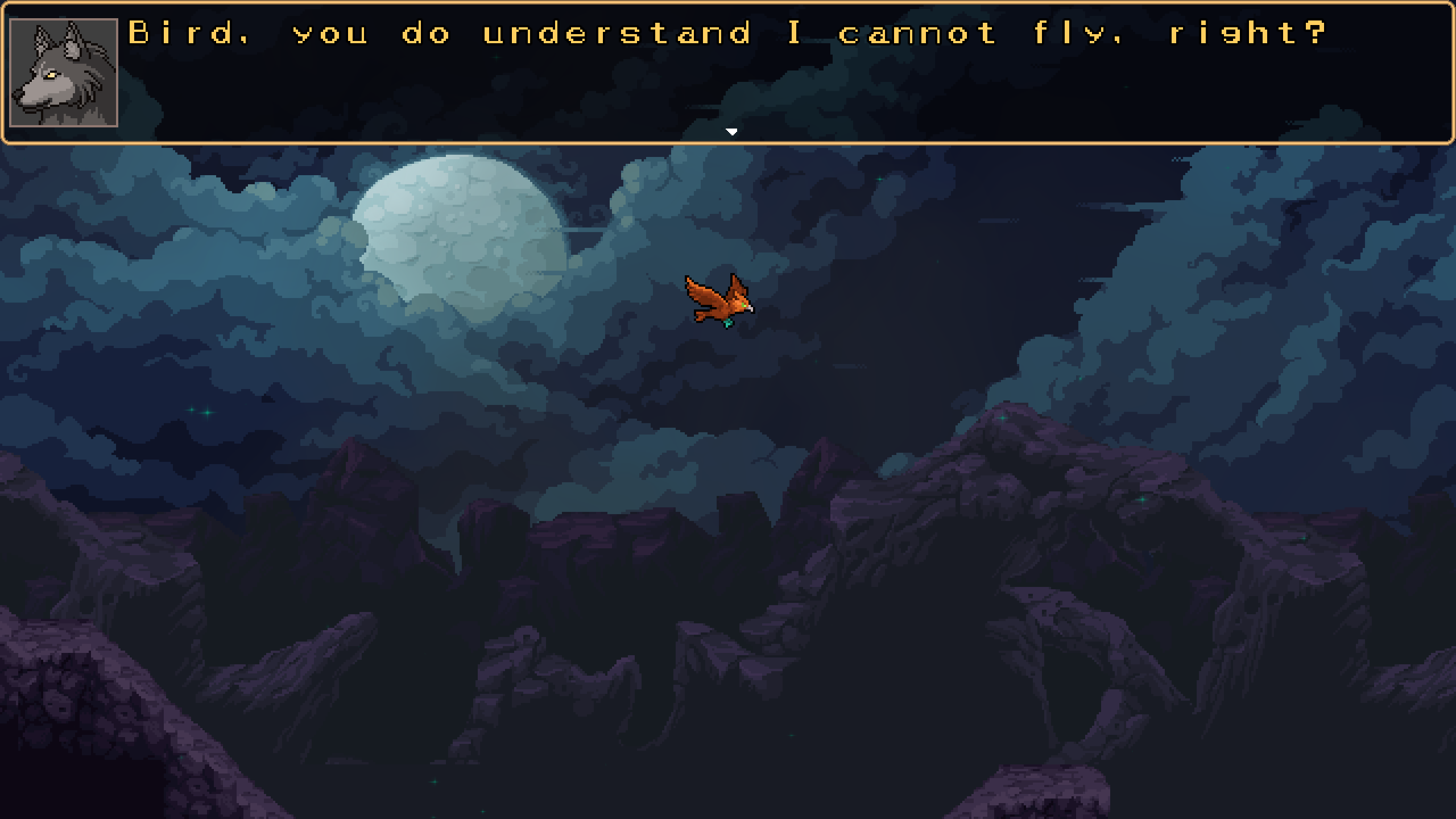 alright. I'll check into what's happening and get back to you.

If I find the culprit, I will be publishing a hotfix

Orc scene - 2nd time around - the eyes are missing. And mouth. And voice.

Thanks for catching that so quickly, I already published a hotfix

I thought it was kind of neat. You should make people pay extra for eyes and mouths on sprites. Consider it for a higher patreon tier.

Exactly how much of the gallery is able to be unlocked at the moment? Game is fun for sure, even without the H content though

any plan on releasing to steam?

i like what i played so far. its definitely a unique combat system for an H game. im not entire sure how to get H content....I managed to get one scene by visiting the lake, and by losing to an orc in the pit...but, the game crashes upon game overs so i wasn't really able to admire it. are they all sex on defeat? not that i mind. i prefer that actually. makes it easier to 'window shop' for enemies. can pick what i want to see on the fly...anyway, can't comment on the H content atm im afraid. i'll wait for 3.5 to try again.

So some H is tied to story choices, some to combat, and some to lorestones (make sure to find all blue lorestones in an area to unlock the cave with a red lorestone) afaik

Currently the game only reaches level 7 right? because I can't go any further, there are even other scenes besides the orcs? amazing game